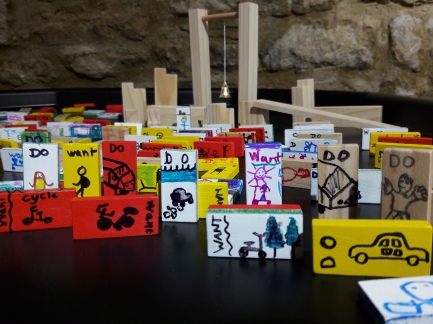 We are delighted that all pupils at Bathampton Primary have contributed to the school’s installation at this year’s Fringe arts Bath, supported by the Conker Crossing Trustees. Their work is on display as part of #getoutofthecar at Unit 20 Milsom Place daily 10am to 6pm until Sunday 10th June.

The school has been collecting travel to school data regularly for the last three years . With it they both encourage active travel in a fun & meaningful way, as well as make the case for road safety improvements locally. Over time, the benefits of safe, active travel have grown to be part of their everyday conversation as a community. #getoutofthecar’s themes of data and transformation are perfect as a result.

Given the Conker Crossing project, Trustees, pupils and Mrs Huntley started to think about what they knew about local bridges. They asked themselves where they were in Bath, what they looked like and what data there was about how many vehicles travelled over them.

The installation puts the new school kiln to good use, purchased by the Friends of Bathampton Primary last year. Year 6 pupils have made copies of local bridges and there are also bridges that visitors can place on a map of Bath to show where a new bridge could unlock active travel in the city.

It was important that every pupil had the chance to contribute, so alongside the map and bridges is a domino rally set for visitors to play with to provide food for thought as to how powerful data can be. Every child has illustrated a domino with how they travel to school and would like to. It is our usual travel to school ‘hands-up survey’ done in a creative way! Key Stage II pupils have also modelled their answers in clay.

The message from the children is clear – we love being active and want to do more of it!

Please join us Sunday 20th May at Bathampton Village Hall, 29 Holcombe Lane Bathampton, BA2 6UL from 2pm to 5pm to see our proposed new foot and cycle bridge over the canal from Tyning Road to the edge of King Edward’s School playing fields.

Guided walk from the hall to the site with the bridge designer and charity trustees 3pm.

In the meantime, we have captured the morning rush in a 2-minute film.

Here is the Need Justification Statement that we recently submitted to the Council for pre planning advice along with our proposed design and supporting surveys.

While we await B&NES’ feedback, please join us on Sunday 20th May 2pm-5pm at Bathampton Village Hall (BA2 6UL) to see the proposal in full, meet the team and give us your feedback. Guided walk 3pm leaving from the hall. Everyone welcome!

Please contact us at bathamptonconkercrossing@gmail.com in the meantime with any questions. Thank you!

There are three volunteers working as Trustees of the charitable association, the Bathampton Conker Crossing, committing their time to bring forward a new foot and cycle bridge for the community. Here is a bit about each of them..

Fiona Powell is Chair of Bathampton Primary’s Safer Routes to School Group and has two children at the school. Her volunteer roles in the Bathampton community also include Treasurer of Bathampton Pre-School Playgroup (2015-2017) and she is a core member of the campaign group the Bathampton Meadows Alliance. Prior to relocating to Bath in 2013 she had worked for 17 years across food retail and business consulting, most recently for five years as a member of the Sainsbury’s Leaders Group of senior managers, joining them from Capgemini business consulting. She now works part-time for Batheaston-based entrepreneurs Carbon-12.

Cheryl Cook has three children currently at Bathampton Primary School. She is Vice Chair to the Governing Body, a member of the Finance Committee, Treasurer of the Friends of Bathampton school charity and member of the Safer Routes to School Group.  Cheryl is an ACMA qualified senior finance manager and programme manager with 20 years’ experience.  She worked as a commercial manager at Unilever, and as a consulting manager at Deloitte.  She has held roles as Head of Finance and Resources nationally for Department of Constitutional Affair’s IT Shared service organisation, and regionally for Her Majesty’s Court Service across the south west.  Prior to a career break she was Ministry of Justice’s Data Driven Department Programme Lead.   She is currently taking a career break to secure an MSc in Strategy, Change and Leadership.

Terry’s three children attended Bathampton Primary and King Edward’s School. He has lived in the area for 25 years and was active in the Bathampton Meadows Alliance campaign. When he came to the area he worked at Bristol City Council leading corporate services; later he led external affairs. This included working with the major cities in England to secure increased powers and resources from government to enable city regions to better deliver the investment needs and priorities of communities, business and the economy. Alongside this he led the development of formal public-private sector arrangements in the West of England, designed to strengthen its voice and joint cross-boundary work on planning, transport, housing, economic, skills and waste matters. Now retired he is pleased to do work in support of the Association’s aims.

The reason our project has got off the ground with strong community support is that the existing Bathampton canal bridge was built for the horse and cart, but now tries to accommodate cars and lorries passing each other, as well as pedestrians and children on bikes/scooters who have to mingle with the traffic in the absence of a pavement. The fact that so many cars use the Toll Bridge to avoid Bath traffic means that we have many more cars on this route than might otherwise be expected.

Why not cross the road to the pavement side? This is dangerous for two reasons – firstly it means crossing on a blind bridge and secondly cars still regularly mount the pavement to avoid other cars that they meet head on…

This week, we launched our charity via the Parish Council Newsletter. Exciting times!